New study to examine host genome’s effect on the microbiome

A new Carlsberg-funded research project led by Jack Howe, postdoc at Center for Evolutionary Hologenomics, aims to determine how a host animal’s genome affects the composition of its microbiome. By experimenting on a unique and regenerative species of flatworm, the project aims to isolate and manipulate specific genes in order to study the subsequent changes in the flatworms' microbiome. 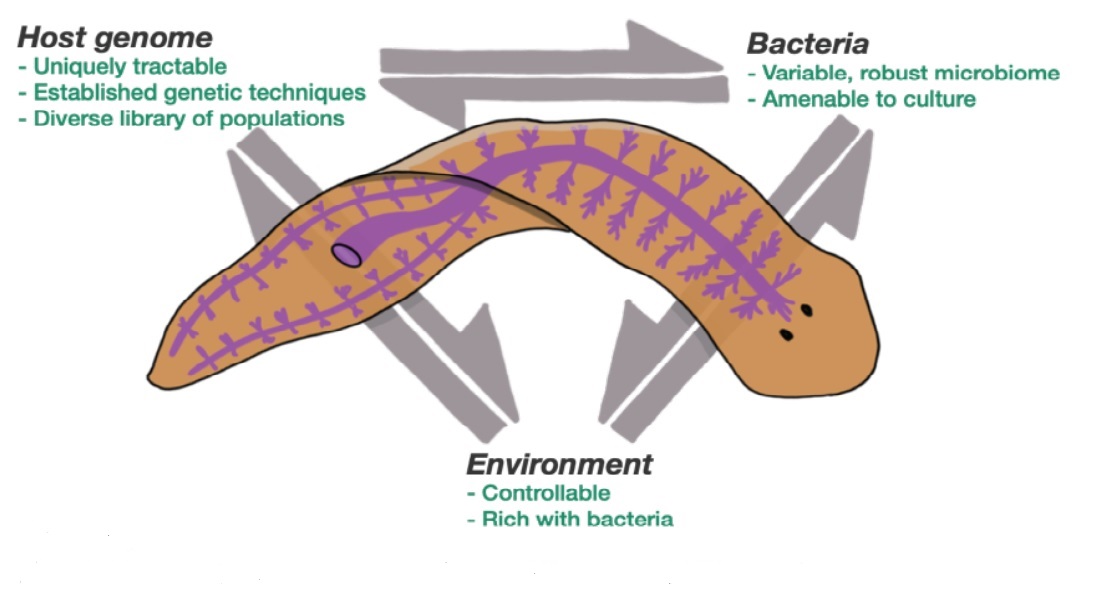 While the countless bacteria in and on our bodies, the microbiome, are supremely influential on our health - including playing roles in issues such as irritable bowel syndrome, cancers and even depression - the role of the host genome's effect on the composition of the microbiome has so far remained relatively unexplored.

This part of the interplay between the microbiome and its host is what Jack Howe, postdoc at The University of Copenhagen, will set out to investigate in a new research project hosted by the Center for Evolutionary Hologenomics. Having received a Carlsberg Foundation Reintegration Fellowship Grant of 1,8 million DKK over the next three years, Jack Howe’s research project attempts to answer the central question: How does the host genome determine the microbiome?

“Essentially I want to understand why, of all the bacteria in the world - and there are millions of millions of different types of bacteria - why is it these specific ones that live in us, on us or around us. How have we evolved to interact with these, and what are the rules that govern that these are the ones we interact with and not different ones,” says Jack Howe. “So, ultimately, it’s about understanding how nature is structured and how we are built. Bacteria are a large part of us, but we don’t really understand them in the same way we do our own selves.”

The spotlight of Jack Howe’s upcoming research project is set on the planarian flatworm, whose incredible regenerative powers makes it uniquely suited to answer the project’s central research question.

“While we humans have stem cells dotted around specific places in our body, such as in our bone marrow, the planarian flatworms have stem cells all over their body. This means that they can regenerate any tissue and, as far as we know, they live forever. We can even cut them up into hundreds of pieces and every single piece will grow back into a new worm,” Jack Howe says.

The regenerative powers and unique stem cell systems of the planarian flatworm are what allow the research project to really pinpoint the genome’s effect on the microbiome more accurately than has ever been done before. Essentially, the planarian flatworms, due to the way they’re built, enable the study to isolate changes in the microbiome purely from changes in the host genome.

Attempting to answer this question on research animals such as mice, flies or frogs would not yield the same types of results, as looking at the host genome’s effect on the microbiome would become muddied by a variety of factors such as subtle environment or developmental differences.

“With these worms we have a system where it’s easier to manipulate these factors separately,” Jack Howe notes. “We can remove all of the stem cells from one worm and inject stem cells from a different and genetically distinct worm into it, and it will take over that first worm, changing its genome. All the while we control the environment and the bacteria, making sure it stays the same. So, the only thing that is changed is the genome. Then we shall, hopefully, see what effect that has on the microbiome.”

Broad applicability in the future

Jack Howe’s project builds upon the growing body of recent research on host-microbiome interactions inferring that the microbiome plays a significant role in various aspects of the hosts’ health and development. Expanding knowledge in this field, including the role that the host genome itself plays on the composition of its microbiome, thereby adds to a field with substantial applicable potential.

“I think that understanding how microbiomes are built can have implications for how we approach health issues in people or even in farmed animals or agriculture,” Jack Howe explains.

Deepening the understanding of host-microbiome interactions in this way may, for example, help when dealing with antibiotic resistant bacteria. Treatments against these often include transplanting microbiomes from one person to another, with the idea being that a healthy microbiome can withstand an invasion from these pathogens that are resistant to antibiotics.

“We might well find out, however, that this works better in people that have a particular genotype or a particular genetic trait. So, the project has implications for this type of personalized medicine. On the other hand, when we take antibiotics we risk damaging the health of our microbiome, and then it becomes a question of how to rebuild that healthy community, which I imagine also differs from person to person,” says Jack Howe.

Jack will be starting the three-year project at The University of Copenhagen from October 2021, and will be working under Tom Gilbert at the Center for Evolutionary Hologenomics throughout the project.